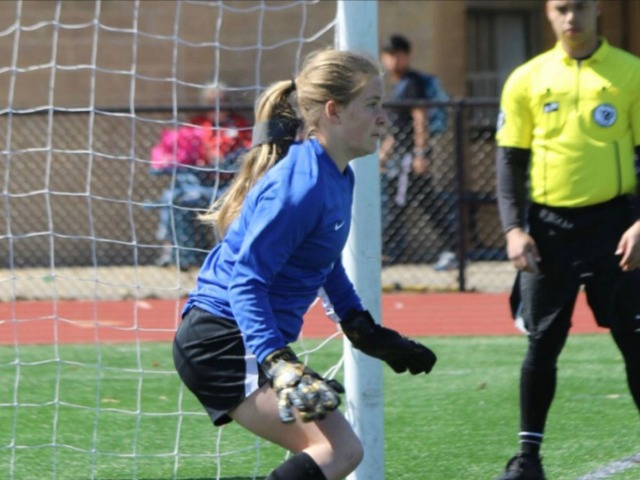 Lizzy Horn scored the Sandites’ only goal in regulation and she scored the first goal of the shootout. She now has eight on the season.

In the shootout, Karsyn Lynch scored after Day’s save, giving the Sandites a 2-0 advantage. DeShazo was the last Sandite to score in the first set of penalty kicks, and the outcome would be determined by a second shootout.

Day started the second set of PKs with a save, Kaslynn Horton scored a goal, and Day ended the PKs with another save.

The girls went 2-1 in the tournament and now have an overall record of 4-1.

The Sand Springs girls split on the first day of the Edison Tournament, but they got a big win against Tulsa Hale.

Bixby 3, Sand Springs 1: The Sandite girls soccer team lost to Bixby, 3-1, in the first game but turned around and beat Tulsa Hale, 10-0, in the second game of the Edison Green and White Tournament Thursday, March 7 at LaFortune Stadium.

“The last time we played Bixby it was 6-0 so we showed some improvement,” said head coach Matt Watkins.

Senior midfielder Elizabeth Watts cored her first career goal in regulation against Bixby, and the Sandites were trailing only 2-1 with under six minutes to play. However, Bixby scored again at around the five-minute mark for the 3-1 win. Watts scored a penalty kick against Coweta, but this goal was her first during regulation. She now has two goals on the season.

Watts goal was assisted by Lizzy Horn, and sophomore goalkeeper Allie Day was on her toes the entire game, recording 20 saves. The goals Bixby scored were the first Day has given up this season in regulation, but she gave up four in a shootout win over Coweta to start the season.


Sand Springs 10, Tulsa Hale 0: Horn scored an impressive four goals in a 10-0 rout over Tulsa’s Nathan Hale that was halted midway through the second half.

Horn, a sophomore forward, scored her four goals in the span of about 15 minutes, which makes it even more impressive. She now has six goals in four games for a 1.5 goal per game average.

Baylee Metcalfe added two goals, and Demi Deshazo, Ari Esparza, Jade Patton and Kasandra Burgess added one goal each. Deshazo now has three goals on the season, and Patton and Burgess are only freshmen, but they are already making an impact on the team.
BACK