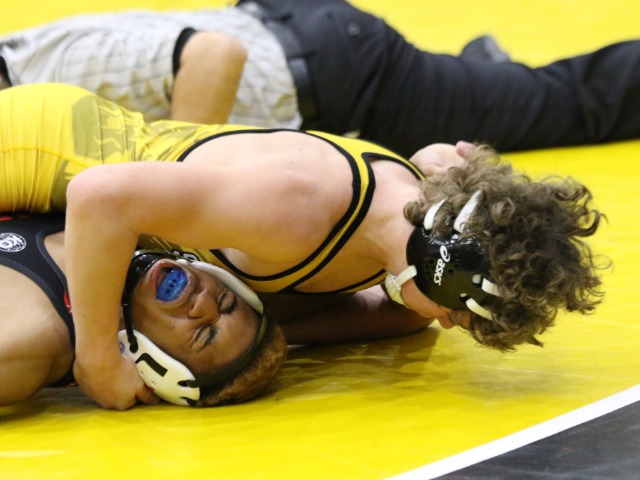 Sand Springs is tearing through its schedule, and Union was the latest victim.

The Class 6A No. 5 Sand Springs wrestling team beat No. 11 Union, 55-18, Thursday, Jan. 10 at Ed Dubie Field House, and one the best Sandite wrestlers didn’t get to step on the mat.

Senior Riley Weir (120) won by forfeit but that didn’t stop him from cheering on each Sandite in every match, twisting and turning with every move.

Christian Forbes (106) started the dual with a technical fall over Union’s Tayton Gwatney in the third period, giving the Sandites a 5-0 lead. Brendon Wiseley recorded another technical fall, scoring 15 points early in the second period over Union’s Jarrod Gilliam and the score doubled to 10-0.

At 138 pounds, Preston Medlin lost a close match to Redskin Chris Dugger, 3-2, but the Sandite crowd thought Medlin scored a reversal in the closing seconds and should have won, but the referee didn’t agree.

Trailing 28-3, the Union Redskins picked up bonus points at 145 pounds when Caleb Phillips was pinned by Jalen Hernandez, cutting into the Sand Springs lead to 28-9.

Scott Patton (152), Chris Kirby (160), and Braden Dahl (170) all recorded pins for the 46-9 advantage, but the Sandites’ Riley Magee lost his match to Jake Rogers by only one point, 3-2. However, Kaden Glass got Sand Springs back on the board with a 5-2 win over Union’s Elijah Tomlin.


Sandite 220-pounder Justin Smith got pinned by Micah Walker, but Josh Fincannon closed out the dual with a pin 35 seconds into his match.

Sand Springs got six pins and technical falls in the 37-point win.