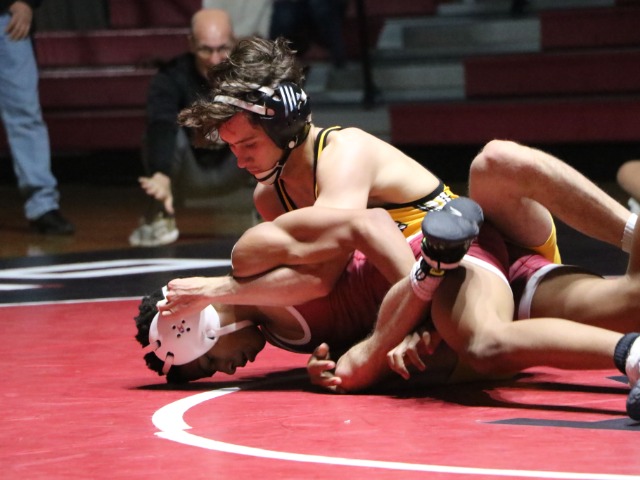 The Sand Springs wrestlers placed 28th at the Kansas City Stampede Dec. 21-22, one of the toughest high school tournaments in the country. However, there was something missing in the finals – a Sandite.

Tuttle High School won the Kansas City Stampede for the fourth-straight year. This year was the first year since 2012 that a Sandite did not win first place in the tournament. Last season, Carter Young placed first at 106 pounds as a freshman, but he transferred to Stillwater for his sophomore season. Daton Fix won first place in 2013, 2014, 2015, and 2016, in three different weight classes, and Payton Scott also took first place at 152 pounds in 2016. So, for the past five seasons, at least one Sandite wrestler placed first at the Stampede. Fix, Scott and Young are all three state champions for Sand Springs, but Fix and Scott have graduated and Young moved on to Stillwater.

This season, the Sandites are ranked No. 5 in Class 6A and are undefeated in duals at 3-0. They’ve beaten No. 10 Owasso, No. 6 Ponca City and No. 10 Stillwater, and they aren’t just beating teams, they are blowing them out.

Sand Springs is averaging 47 points a dual, and they are beating their opponents by an average of 26 points per dual. Their biggest margin of victory was a 54-21 win over Owasso to start the season.

In their first tournament of the season, Sand Springs placed fourth at the Perry Tournament without a full line-up. Seven Sandites placed, and Brendan Wisely, Blake Jones, Scott Patton and Dayvon Taylor took third.
BACK