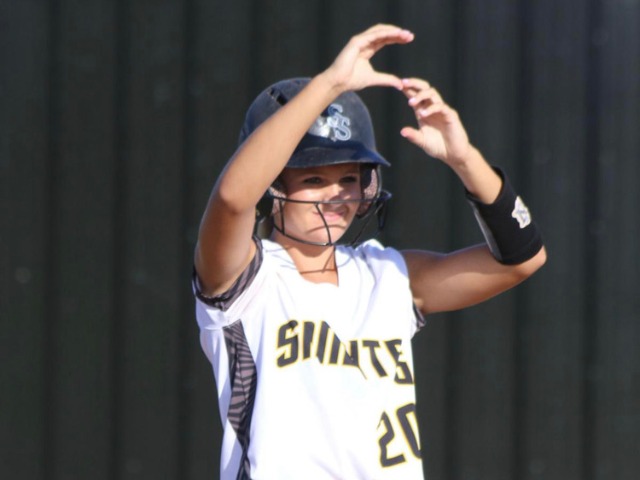 The Sand Springs softball team ended the season with a record of 23-9, won their East regional and earned a fourth-straight trip to the state tournament. They lost to Edmond North in the first round in extra innings.

The season didn’t quite start like it was supposed to start. Taber, a senior pitcher, threw the first game against Tahlequah, but didn’t pitch again until the end of the regular season due to a sore arm.

Then, 21 games later, Taber was back on the mound with a 14-3 win over Stillwater. She beat Stillwater again six days later, and started in the first game of the East regional, beating Enid, 18-0. After winning the regional, the Sandites went to the state tournament and Taber threw against Edmond North, losing, 10-5, in nine innings. It was her only loss of the season. Taber pitched seven games on the season with a 6-1 record. When she wasn’t on the mound, Taber played left field and still batted.

She was named the Dist. 6A-4 pitcher of the year.


Blair, normally a shortstop, was saddled with the task of replacing Taber on the mound as the No. 1 pitcher. Blair was going to pitch this season when Taber needed a rest, but she was thrown into the top spot and was impressive. She ended the season with a 9-3 record and played shortstop when she wasn’t on the mound. She had a six-game winning streak in the middle of the season but lost to Union, 3-1, in her last game as a pitcher. Blair was also chosen as a pitcher on the all-district team and is listed as a utility player on the all-state team.

Presnell, a second baseman, was basically a shoo-in for all-state after the senior infielder was named the district’s defensive player of the year. At second base, Presnell had 129 total chances with 56 assists, 60 putouts, four errors, and was involved in 10 double plays. She also led the team in hitting with a batting average of .462, and Sabrina Usher was right behind her with an average of .458. Presnell had 104 at bats with 48 hits, 26 RBIs, 14 walks and six home runs.