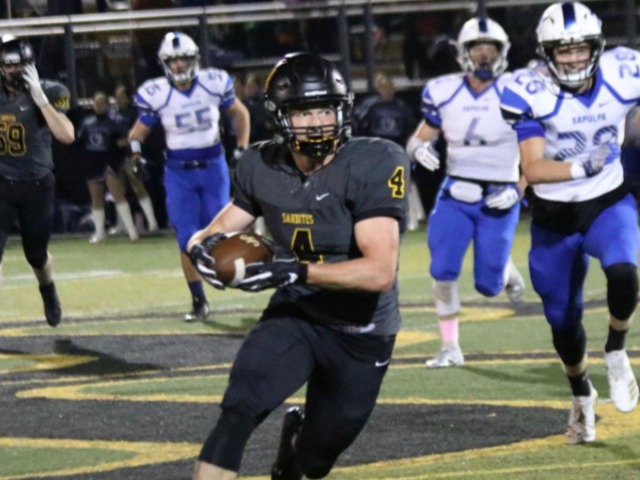 Caden Pennington played the game of his life.

The senior quarterback rushed for six touchdowns and threw another in a 48-34 Sand Springs win Friday, Oct. 26 at Memorial Stadium in the 92nd edition of the Highway 97 Rivalry, and it was senior night. Pennington now has 12 rushing touchdowns and 12 passing on the season, and last year, he had six total.

Sand Springs won its fifth-straight in the series that is now 45-42-5 in Sapulpa’s favor.

Pennington scored the first three touchdowns of the game on runs of 1, 2 and 3 yards for the 20-0 Sandite lead with 6:25 left in the second quarter.

Junior running back Marcus Esparza finally put Sapulpa on the board with an 18-yard run with just under four minutes to play in the first half, but there would be two more scores before halftime.

Pennington scored on a 3-yard run, and Sapulpa quarterback Eli Williams’ 24-yard keeper pulled the Chieftains within 13 points at halftime, 27-14.

In the game, Esparza rushed for four touchdowns, and Williams added another. All of the Sapulpa touchdowns were on the ground, and the Sandite defense kept Williams in check, not allowing him to be much of a factor in the game.

Leading 34-20 in the fourth quarter, the Sandites got a 33-yard touchdown from Pennington, but Esparza answered again for the Chieftains with a 7-yard score. With a 41-27 advantage, Pennington put the exclamation point on the game with a 1-yard run at the 1:55 mark to end the Sandite scoring.

Early in the drive, Pennington scored on a 50-yard run, but it was called back doe to holding. He eventually scored his sixth rushing TD of the game with the 1-yard run.

Esparza scored the last touchdown on a 2-yard run.

Sand Springs head coach Dustin Kinard was diagnosed with pancreatic cancer earlier in the season, and the Sapulpa fans showed a lot of class during the Highway 97 Rivalry. The Sapulpa coaching staff, led by head coach Robert Borgstadt, who is a former Sand Springs coach, wore t-shirts supporting Kinard’s fight, and the Chieftain student section posted a sign that read, “His Fight is Our Fight.”
BACK