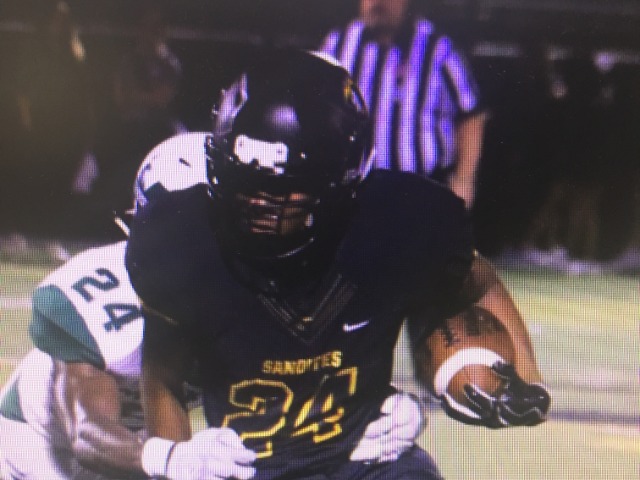 In a game that went back and forth, Muskogee pulled away late, taking away a much-needed district game from the Sandites.

Muskogee (4-1, 2-0) trailed three times in the game but found its rhythm in the second half, outscoring Sand Springs, 28-6.

Sandite quarterback Caden Pennington threw two passes in the first half and one was a 60-yard touchdown to Daren Hawkins. First, Pennington started the game scoring with a 29 yard run for the 7-0 Sandite lead. Muskogee running back Jimmie Coleman tied the game, 7-7, on a short run at the 5:52 mark of the first quarter.

After Pennington’s touchdown pass, the Sandites gave up a safety with a bad snap on a punt, cutting into the Sand Springs lead, 14-9.

Both teams kept the ball on the ground for the majority of the first half and Coleman added a 56-yard score for the first Rougher lead of the game. Rougher receiver Kauner Ashley added the two-point conversion for the, 17-14, Muskogee lead at the end of the quarter.

Sand Springs running back Joel Mackey scored the only touchdown of the second quarter on a 29-yard run, and the Sandites took a 21-17 advantage into halftime.

The second half belonged to the Roughers.

Coleman scored three rushing touchdowns in the final quarters, two in the fourth, and quarterback Ty Williams added a short TD run for the final score of the game.

Sand Springs’ Trey Wilkerson scored the only TD of the second half for the Sandites on a 27-yard run at the 1:40 mark of the third quarter.

Defensively, Hayden Cramer was in the backfield all night and recorded several sacks and tackles for losses. For Muskogee, Josh Campbell recovered a Sandite fumble in the third quarter, and the Rougher special teams blocked a punt in the fourth. Rougher defensive end Colton Edwards blocked Cameron Smith punt attempt at the Sandite 11-yard line, and it led to a Coleman touchdown.
BACK