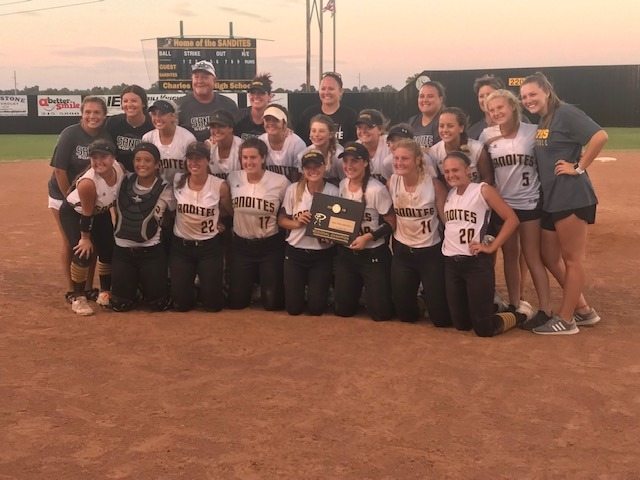 After losing to Union in the winner’s bracket Monday night, Sand Springs put themselves in a do-or-die situation, and they chose life.

Sand Springs fast-pitch softball beat Enid, 16-0, and then beat Union in back-to-back games, 10-0, and, 13-7, Wednesday, Oct. 3 in the east regional at the Sandite Sports Complex.

The Sandites made it tougher than it needed to be, but they advanced to the state tournament, winning three-straight games in the final day.

Sand Springs 13, Union 7: Senior Kimi Presnell started the game with a lead-off home run to set the tone of the game and it led to a regional championship and a state playoff berth. It was her sixth homer of the season.

Not to be outdone, junior catcher Sabrina Usher hit her ninth home run of the season in the top of sixth inning, scoring the final two runs of the game. Senior pitcher Jacie Taber wanted in on the action and hit her second homer of the season, and second of the regional, with a solo shot in the top of the third.

“I never once doubted my team that we could come back and win,” Taber said, after the game. “We have done it the past three years and I wouldn’t have wanted to be out there with any other team. It is an amazing feeling knowing we accomplished our goal of going to state again.”

This is the sixth time in seven years the Sandites have made it to state and the fourth-straight.

Sand Springs (23-8) never trailed and jumped out to a big 6-0 lead in the top of the third, but Union came storming back and pulled within two runs, 6-4, in the bottom of the inning. In the top of the fourth, the Sandites scored four more runs to pull away.

Union amassed 10 hits but Sand Springs had 11, and both teams recorded two errors each.

Presnell and Usher led their team with three RBIs each, and Felicity Horn, Cameron Clemons and Elizabeth Luttrell had two each.

Senior pitcher Madelyn Blair got the start, but Taber took the mound in relief and finished the game, pitching the last four and two-thirds innings with three hits, three runs, no earned runs, two walks and one strike out.

Sand Springs 10, Union 0: To keep their state playoff hopes alive, the Sandites had to beat Union, and they did it in five innings with a 10-0 run rule.

The game was fairly uneventful until Sand Springs exploded for eight runs in the bottom of the fifth inning, forcing the regional championship "if" game.

Taber got her 5th win of the season throwing all five innings with three hits, four strike outs and two walks.

Sand Springs 16, Enid 0: There was no doubt Sand Springs would win. It was a matter of by how much.

Usher and Taber both had home runs in a game where the Sandites scattered 18 hits, scoring a game-high six runs in the top of the fifth inning. It was Taber’s first homer of the season and she totaled four RBIs to lead the team. Usher had three RBIs, Horn, Clemons and Luttrell had two each.