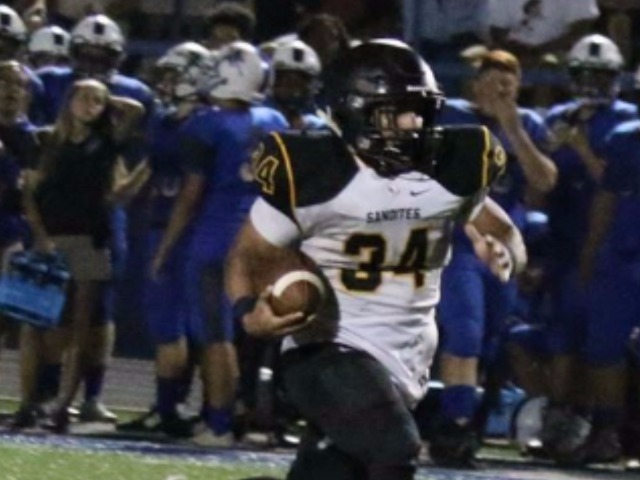 SAPULPA – Senior running back Payton Scott now holds the record for the most rushing yards in a game in Sand Springs history.

Scott rushed for 358 yards with four touchdowns in Sand Springs’ 31-16 win over the Sapulpa Chieftains in the Highway 97 Rivalry, Friday, Sept. 22 at George F. Collins Stadium.

“I don’t just have the record,” Scott said, after the game. “Those guys that were blocking, the wide receivers, the linemen and fullbacks, have the record. I just ran the ball. It’s way more than just me. I’ve got give love to my guys.”

Scott scored the first two touchdowns of the game on runs of 45 and 19 yards, giving the Sandites a 14-0 lead, and kicker Jaden Wiser nailed a 26 field goal with time running out in the second quarter.

Sand Springs (2-2) took a 17-0 lead into halftime, but Sapulpa refused to go away in the third quarter.

Chieftain quarterback Eli Williams threw a 19-yard pass to Marcus Esparza in their first drive of the quarter, and Williams added a one-yard quarterback keeper with only 42 seconds left. The Chieftains seemed to have the momentum, cutting the Sandite lead to only, 17-13, after Kavion Mortazavi missed the extra point.

Scott then answered with a 75-yard score, his third of the game, and his longest run of the night. He ended the scoring with a 36-yard scamper with just over three minutes left in the game.

Mortazavi kicked a 27-yard field goal for Sapulpa, and was the only Chieftains to score in Sapulpa’s 38-3 loss to Bishop Kelley last week.

Sapulpa (0-4) also lost the turnover battle, fumbling the ball away once and throwing two interceptions. Sand Springs’ Kris Edwards and Braden Askew both grabbed interceptions, and Wiser recovered a fumble off of a kick off.

Sand Springs assistant coach Terrance Dixon held the school’s rushing record in 2009 with 334 yards in big win over Tulsa Memorial. Scott said he talked with Dixon after the game but wouldn’t reveal what was said.

“It was a private conversation,” Scott said.
BACK